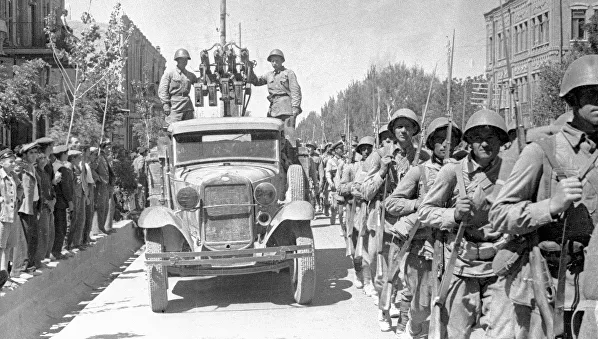 On June 22nd, 1941, Hitler attacked and invaded the Soviet Union. Resistance was poor and the Blitzkrieg was devastatingly effective.

Although Anthony Eden had already twice warned Ivan Maisky the Soviet Ambassador in London, of Axis intentions, and even proposed a delegation to Moscow in order to estimate Russian needs at least 20 days before Hitler’s invasion, this was dismissed as rumour. Pathological suspicion of Britain was paramount in Stalin’s mind, and remained so until Roosevelt’s death in 1945.

Churchill and Eden, witnessing the rapid advance of German forces, feared for their interests in Persian oil and India. They reasoned that support for Russia would diminish pressure on Europe; would save Britain, and would be the likeliest cause for a German defeat. The Murmansk ‘run’ was too hazardous due to submarines and the forbidding ice-packs for six months of the year. The best conduit for conveying war materiel to the beleaguered Russians was therefore via the Persian Gulf, using Reza Shah’s railway and new roads to the Caspian, where armament could be shipped to Volga ports and Stalingrad.

Although Iran had already twice declared her neutrality (Sept. 4th, 1939, and June 6th, 1941), a convenient ‘Casus Belli’ was constituted by the much-exaggerated ‘Fifth Column’ in Iran, and Reza Shah’s German proclivities, which by the way, were shared by most of the Iranian ruling class. After all, Iran had suffered decades of bullying by both the Bear and the Bull-dog (the 1907 Russo-British division of the country into ‘zones of influence’, as well as the more recent Curzon-inspired 1919 proposals which would have turned Iran into a British protectorate), and now an alternative, highly successful potential saviour was looming from the West. In fact, while the Russians claimed there were 7,000 Germans working in Iran at the time, a more realistic, unbiased estimate by a US observer put the figure at no more than 700 to 900.

Incidentally, while in 1932, only 8% of trade was from Germany, by 1939, this portion had grown to 45%. Indeed, the north-south railway created by Reza Shah (paid for from taxes on sugar and tea), and built by the Danish company Kampsax,was largely German – the rolling stock, training bursaries, cadre of engineers were all German. Churchill accordingly put his proposals to Franklin Roosevelt who, as a devoted Wilsonian, shrank from the invasion of a neutral country. The more pragmatic Churchill (Inter arma silent leges) arguing that only the USA could aid Russia and relieve Europe, effectively persuaded FDR to participate, and the two leaders met in August 1941, on a naval ship in mid-Atlantic to discuss future strategy.

At this historic meeting, the Atlantic Treaty was agreed, and became the main pillar of new international relations; condemning the use of force and supporting the independence and security of all nations, effectively becoming the basis for the future UN Charter. Joint notes from the British and Russians were delivered to the Iranian Prime Minister Ali Mansour in both July and August, demanding the internment and expulsion of all German citizens. Mansour’s vague and dismissive responses were not deemed to be satisfactory.

The Sonic History of Modern Iran